Question 1.
What does an electric circuit mean?
Answer:
A continuous conducting path consisting of wires and other resistances (like electric bulb, etc.) and a switch, between the two terminals of a cell or battery, along which an electric current flows, is called a circuit.

Question 2.
Define the unit of current.
Answer:
The SI unit of electric current is ampere (which is denoted by the letter A). When 1 coulomb of charge flows through any cross-section of a conductor in 1 second, the current flowing through it is said to be 1 ampere.

Question 1.
Name a device that helps to maintain a potential difference across a conductor.
Answer:
An electrical cell (or a battery).

Question 5.
Use the data in Table on page 207 of this book to answer the following:
(a) Which among iron and mercury is a better conductor?
(b) Which material is the best conductor?
Answer:
(a) The electrical resistivity of iron is 10.0 × 10-8 Ω m whereas that of mercury is 94.0 × 10-8 Ω m. Since the resistivity of iron is less than that of mercury, therefore, iron is a better conductor than mercury.
(b) Silver metal has the lowest electrical resistivity (1.60 × 10-8 Ω m), therefore, silver metal is the best conductor of electricity. 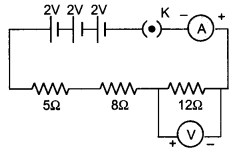 Thus, the resistance of electric iron which takes the same current as drawn by all the three appliances will be 31.25 Ω.
Now, Potential difference, V = 220 V
Current, I = ? (To be calculated)
and, Resistance, R = 31.25 Ω (Calculated above)

Thus, the current passing through the electric iron is 7.04 amperes.

Thus, we can obtain a total resistance of 4 Ω by connecting a parallel combination of 3 Ω and 6 Ω resistors in series with 2 Ω resistor.

(b) The lowest resistance can be secured by connecting all the four coils in parallel. In this case:

Thus, the lowest resistance which can be secured is 2 ohms.

Question 1.
What determines the rate at which energy is delivered by a current?
Answer:
Electric power of the appliance. 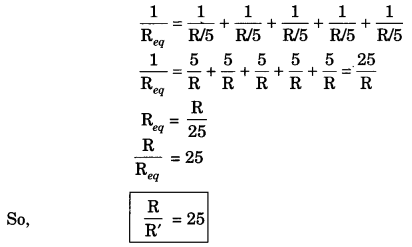 Question 4.
Two conducting wires of the same material and of equal lengths and equal diameters are first connected in series and then parallel in a circuit across the same potential difference. The ratio of heat produced in series and parallel combinations would be
(a) 1: 2
(b) 2 : 1
(c) 1 : 4
(d) 4 : 1
Answer:
Since both wires are made up of same material and all other parameters are identical,
so, resistance of both the wires is same. Let it be R. When connected in series, their equivalent resistance is given by
Req = R1 + R2 = R + R = 2R
When connected in parallel, their equivalent resistance is given by 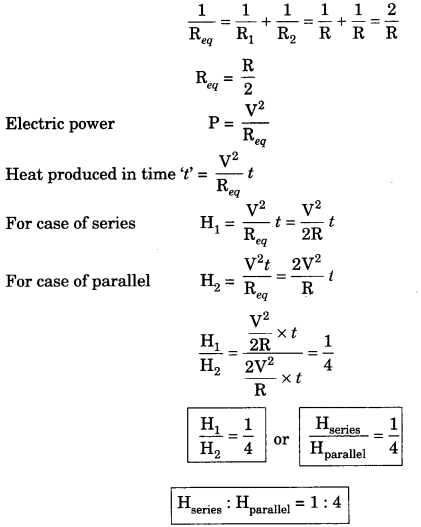 (c) is the correct answer.

Question 7.
The values of current I flowing in a given resistor for the corresponding values of potential difference V across the resistor are given below:

Plot a graph between V and I and calculate the resistance of that resistor.
Answer: Question 12.
Several electric bulbs designed to be used on a 220 V electric supply line, are rated 10 W. How many lamps can be connected in parallel with each other across the two wires of 220 V line if the maximum allowable current is 5 A?
Answer:

Question 13.
A hot plate of an electric oven connected to a 220 V line has two resistance coils A and B, each of 24 Ω resistance, which may be used separately, in series, or in parallel. What are the currents in the three cases?
Ans. Given, potential difference = 220 V
Resistance of each coil RA = RB = 24 Ω
(i) When each coil A or B is connected separately, current through each coil i.e., 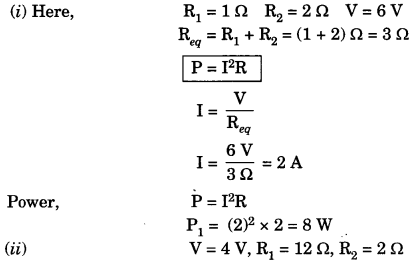 In a parallel circuit, potential (V) across each resistor is the same and is equal to the potential applied across the circuit.
Power dissipation through 2 Ω resistor

Question 18.
Explain the following:
(а) Why is the tungsten used almost exclusively for filament of electric lamps?
(b) Why are the conductors of electric heating devices, such as bread-toasters and electric irons, made of an alloy rather than a pure metal?
(c) Why is the series arrangement not used for domestic circuits?
(d) How does the resistance of a wire vary with its area of cross-section?
(e) Why are copper and aluminium wires usually employed for electricity transmission?
Answer:
(a) Tungsten has high melting point (3380°C). It does not melt and becomes very hot emitting light.
(b) The resistivity of an alloy is generally higher than that of pure metals and alloys do not oxidise readily at high temperatures.
(c) In series arrangement, if any one of the appliances fails or is switched off, all the other appliances stop working.
(d) Resistance of a wire is inversely proportional to its area of cross-sectional area (A)
R ∝ \(\frac{1}{\mathrm{~A}}\)
(e) Copper and aluminium posses low resistivity and hence low energy losses.

Discussion and Conclusion:
The graph of V and I is a straight line passing through origin and slope of graph is equal to resistance