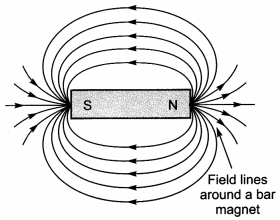 Question 3.
Why don’t two magnetic lines of force intersect each other?
Answer:
Magnetic field-lines do not cross each other. If they did, it would mean that at the point of intersection, the compass needle would point towards two directions, which is not possible. 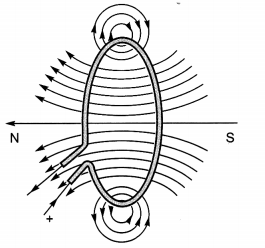 Question 2.
The magnetic field in a given region is uniform. Draw a diagram to represent it.
Answer:
The uniform magnetic field is represented by parallel, equidistant lines of equal length as shown in figure.

Question 1.
Which of the following property of a proton can change while it moves freely in a magnetic field? (There may be more than one correct answer.) (a) Mass (6) Speed (c) Velocity (d) Momentum.
Answer:
(c) Velocity and (d) Momentum. 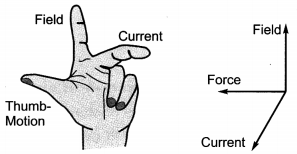 Question 3.
The device used for producing electric current is called a
(a) generator
(b) galvanometer
(c) ammeter
(d) motor.
Answer:
(a) generator

Question 6.
State whether the following statements are true or false.
(а) An electric motor converts mechanical energy into electrical energy.
(b) An electric generator works on the principle of electromagnetic induction.
(c) The field at the centre of a long circular coil carrying current will be parallel straight lines.
(d) A wire with a green insulation is usually the live wire of an electric supply.
Answer:
(a) False
(b) True
(c) True
(d) False.

If north pole is placed near side B and repulsion is felt them B is North pole and vice versa. 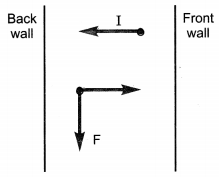 Question 11.
Draw a labelled diagram of an electric motor. Explain its principle and working. What is the function of a spilt ring in an electric motor?
Answer:
An electric motor is a rotating device that converts electrical energy to mechanical energy.
Principle: It works on the principle that when electric current is passed through a conductor placed perpendicularly in a magnetic field, a force acts on it as a result of which the conductor begins to move. An electrical motor, is shown in the figure given on the next page. Current in the coil ABCD enters from the source battery through conducting brush X and flows back to the battery through brush Y. The current in the arm AB of the coil flows from A to B. In arm CD it flows from C to D, that is, opposite to that through arm AB. On applying Fleming’s left hand rule for the direction of force on a current-carrying conductor in a magnetic field, we find that the force acting on arm AB pushes it downwards while the force acting on arm CD pushes it upwards. Thus the coil and the axle O rotate anti-clockwise. At half rotation, Q makes contact with the brush X and P with brush Y. Therefore the current in the coil gets reversed and flows along the path DCBA. The reversal of current also reverses the direction of force acting on the two arms AB and CD. Thus the arm AB of the coil that was earlier pushed down is now pushed up and the arm CD previously pushed up is now pushed down. Therefore the coil and the axle rotate half a turn more in the same direction. The reversing of the current is repeated at each half rotation, giving rise to a continuous rotation of the coil and to the axle.
The split ring reverses the direction of flow of current in an electric motor.

Question 13.
A coil of insulated copper wire is connected to a galvanometer. What will happen if a bar magnet is (i) pushed into the coil, (ii) withdrawn from inside the coil, (iii) held stationary inside the coil?
Answer:
(i) The needle of the galvanometers moves momentarily in one direction
(ii) The needle of the galvanometers moves momentarily but in the opposite direction to (i)
(iii) No deflection of needle.

(ii) Fleming’s left-hand rule determines the force on a conductor: According to this rule, stretch the thumb, forefinger and middle finger of your left hand such that they are mutually perpendicular. 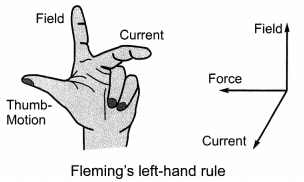 Question 16.
Explain the underlying principle and working of an electric generator by drawing a labelled diagram. What is the function of brushes?
Answer:
In an electric generator, mechanical energy is used to rotate a conductor in a magnetic field to produce electricity.
Principle: It works on the principle that when magnetic lines of force linked with a coil changes, a current is induced in the coil.

An electric generator is shown in the figure below. When the coil ABCD is rotated clockwise, by applying Fleming’s right-hand rule, induced currents are set up in the these arms along the directions AB and CD. Thus an induced current flows in the direction ABCD. If there are larger number of turns in the coil, the current generated in each turn adds up to give a large current through the coil.

After half a rotation, arm CD starts moving up and AB moving down. As a result, the direction of the induced currents in both the arms change, giving rise to the net induced current in the direction DCBA. The current in the external circuit now flows from B1 and B2. Thus after every half rotation the polarity of the currnet in the respective arms changes. Such a current, which changes direction after equal intervals of time, is called an alternating current (abbreviated as AC). This device is called an AC generator.

The function of the brushes is to make contact with the rotating rings and through them supply current to the external circuit.

Question 17.
When does an electric short circuit occur?
Answer:
Electric short-circuit occurs when live wire comes in direct contact with the neutral wire due to some fault in an appliance or damaged insulation of the wires.

Question 18.
What is the function of an earth wire? Why is it necessary to earth metallic appliances?
Answer:
It is used as a safety measure to ensure that any leakage of current to a metallic body does not give severe shock to the user.

Earth wire provides a low resistance conducting path for electric current to the earth which may have leaked from an appliance.