Thus, each oxygen is bonded to the carbon atom by a double bond.

Question 2.
What would be the electron dot structure of a molecule of sulphur which is made up of eight atoms of sulphur?
Answer:
The atomic number (Z) of sulphur is sixteen and its electronic configuration is 2, 8, 6. Sulphur atom has sixteen electrons. The chemical formula of sulphur molecule is S8. Each sulphur atom is linked to similar atoms on either sides by single covalent bonds and thus, completes its octet. The molecule is in the form of a ring also represented by a crown shape.

Question 2.
What are the two properties of carbon which lead to the huge number of carbon compounds we see around us? [CBSE 2013, 2014]
Answer:
The two main properties which leads to huge number of carbon compounds are:
(i) Catenation: It is self linking property of carbon, due to it’s small size and high electronegativity. As a result, each carbon becomes capable of forming stable bonds with other carbon atoms. This can be extended in the form of straight chain or branched chains or in the form of rings.

(ii) Tetravalency of carbon: Carbon having four electrons in its valence shell, can share these four electrons either with the other four carbon atoms or with any other elements like N, O, H, S and halogens, etc. Hence, the number of carbon compounds increases to a large extent.

Question 3.
What will be the formula and electron dot structure of cyclopentane?
Answer: Now carbon has 4 electrons in the valence shell and hydrogen has one. Therefore, to complete its octet, each carbon shares two of its electrons, one each with two other carbons atoms forming a five-member ring. The remaining two electrons of each carbon share one electron each with two hydrogen atoms. In this way, each hydrogen completes its duplet. The complete electron dot structure of cyclopentane is shown alongside. Bromopentane has a chain of five carbon atoms. It can exist in a number of forms which are structural isomers.

Question 5.
How would you name the following compounds? [CBSE 2014]

Question 1.
Why is the conversion of ethanol into ethanoic acid an oxidation reaction?
Answer:
Ethanoic acid (CH3COOH) has one oxygen atom more and two hydrogen atoms less than ethanol (C2H5OH).
In general C2H5OH → CH3COOH

Therefore, this conversion is an oxidation reaction.

Question 1.
How would you distinguish experimentally between an alcohol and a carboxylic acid? [CBSE 2013]
Answer:

Question 2.
People use a variety of methods to wash clothes. Usually after adding the soap, they ‘beat’ the clothes on a stone, or beat it with a paddle, scrub with a brush or the mixture is agitated in a washing machine. Why is agitation necessary to get clean clothes?
Answer:
During the cleansing action of soaps and detergents, the hydrocarbon tails of the soaps form an interface between the grease or dirt on the surface of cloth and water. Hence, surface tension of water decreases and a stable mixture of oil in water is formed. To wash away the loosened dirt particles from the surface of the cloth, it is agitated either mechanically, or beaten with a stone or with paddle or agitated in a washing machine.

In butanone, the functional group is ketone.

Question 4.
Explain the nature of the covalent bond using the bond formation in CH3Cl.
Answer:
In CH3Cl i.e., Chloromethane

Methane CH4
Ethane CH3CH3
Propane CH3CH2CH3
Butane CH3CH2CH2CH3
It can be noticed that there is a difference of CH2 unit between each successive compound.

Question 7.
How can ethanol and ethanoic acid be differentiated on the basis of their physical and chemical properties? [CBSE 2011]
Answer:
Distinction based on physical properties:

Question 8.
Why does micelle formation take place when soap is added to water? Will a micelle be formed in other solvents such as ethanol also? [CBSE 2011, 2013]
Answer:
A soap has two parts:
(a) A polar, water-soluble, hydrophilic end.
(b) A non-polar, water-insoluble, hydrophobic end.

So when soap is added to water, polar ends dissolve in water whereas non-polar do not. Hence, spherical structures are formed called micelles.
But in ethanol, soap is soluble, hence micelles are not formed.

Question 11.
What change will you observe if you test soap with litmus paper (blue and red)?
Answer:
When soap is dissolved in water, the solution is alkaline in nature due to the formation of alkali NaOH or KOH. The solution changes the colour of red litmus to blue. However, the solution does not change the colour of blue litmus. 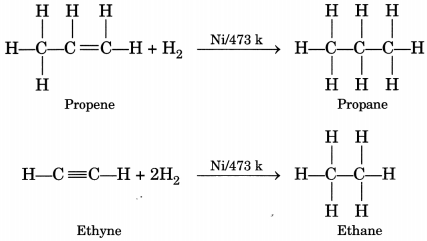 Question 15.
Explain the mechanism of the cleaning action of soaps.
Answer:
Cleansing action of soaps: The dirt present on clothes is organic in nature and insoluble in water. Therefore, it cannot be removed by only washing with water. When soap is dissolved in water, its hydrophobic ends attach themselves to the dirt and remove it from the cloth. Then the molecules of soap arrange themselves in micelle formation and trap the dirt at the centre of the cluster. These micelles remain suspended in the water. Hence, the dust particles are easily rinsed away by water.

Conclusion: Most of the things we use or consume in our day to day life are made up of compounds of carbon.

Conclusion:
The common difference in the molecular formulae and molecular masses of any two successive (adjacent members) of a homologous series are CH2 unit and 14 u (mass units) respectively.

Observation and conclusion: When the hole of the Bunsen burner is closed, enough supply of air is not available and hence the gas bums incompletely to produce a yellow sooty flame.

However, when the hole is open, complete combustion of gas occurs and a blue flame is produced.

Observation and conclusion: When alkaline KMnO4 is added to warm alcohol drop by drop, the colour of KMnO4 disappears because it oxidizes ethanol to ethanoic acid and is itself reduced to manganese dioxide (MnO2). On the other hand if KMnO4 solution added is more than what is required to oxidize ethanol to ethanoic acid, then some of the KMnO4 solution remains unused and hence its colour will not disappear.

Observation and conclusion: When a small piece of sodium is added to absolute alcohol, a brisk effervescence occurs due to the evolution of H2 gas. Hydrogen is a combustible gas, therefore, when a burning splinter is brought near it, it burns with a pop sound.

Observation: Dilute HCl and dilute CH3COOH turn blue litmus red, but this cannot decide that whether hydrochloric acid is a stronger acid than acetic acid.

Conclusion: Since HCl is completely ionised while acetic acid is only partly ionised, therefore, hydrochloric acid is a stronger acid than acetic acid.

Observation and conclusion: Absolute ethanol reacts with glacial acetic acid in presence of a few drops of conc. H2SO4 to form a sweet-smelling ester, i.e., ethyl ethanoate. Conc. H2SO4 removes the H2O formed during the reaction and shift the equilibrium in the forward direction.

Observation and conclusion: When sodium carbonate is added to a dilute solution of ethanoic acid, a brisk effervescence is produced due to the evolution of carbon dioxide (CO2) gas.

When CO2 gas is passed through freshly prepared lime water, it turns lime water milky due to the formation of insoluble calcium carbonate.

Same observations are made when sodium bicarbonate is used instead of sodium carbonate.

Observation and conclusion: When test tube B containing cooking oil, water and soap is allowed to stand after vigorous shaking only one layer was observed. This shows that oil dissolves in soap and thus helps in cleaning.

When test tube A containing water and cooking oil was allowed to stand after vigorous shaking, two separate layers – one of water and the other of oil was seen. This shows that oil does not dissolve in water and hence water alone cannot clean clothes.

Observation and conclusion: The test tube that contains soft water, i.e., distilled water or rainwater, produces foam readily. On the other hand, the test tube which contain hard water produces a curdy white precipitate due to the formation of insoluble calcium or magnesium salts.

Conclusion: Detergent can be used for washing both in soft and hard water while soaps can be used only in soft water.