Question 1.
(A) What are Amines? How are they classified? Write names and structures of all the isomeric amines having the molecular formula (1) C2H7N (2) C3H9N and (3) C4H11N.
(B) How will you separate a mixture of primary, secondary and tertiary amine? How would you distinguish between primary, secondary and tertiary amines?
(C) How canyon prepare primary amines from (1) Alkyl cyanide (2)Nitro compound (3) Amides and (4) Oxime.
Answer:
Amines- Amines are derivatives of ammonia in which one or more hydrogen atoms have been replaced by alkyl groups, e.g.

Classification of amines- Amines are classified as primary (1°), secondary (2°) and tertiary (3°) amines depends upon whether one, two or all the three hydrogen atoms of ammonia molecule are replaced by alkyl groups. i.e.

(2) Different isometric forms of amine having the molecular formula C3H9N- 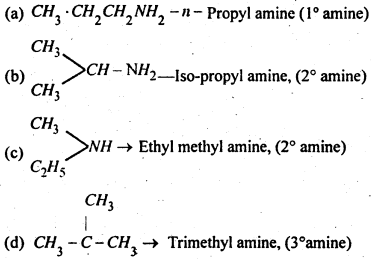 (3) Different isomeric formula of amine having the molecular formula C4H11N- 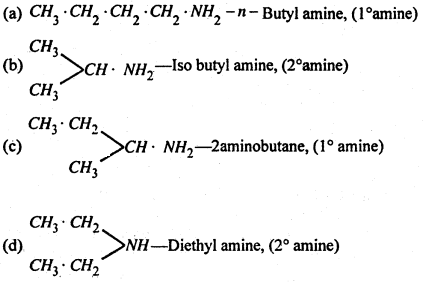 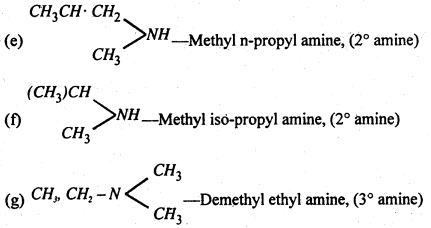 Hence, when the mixture of 1 °, 2° and 3 ° amines is subjected to functional distillation, different amines distil at different temperatures.

2. Hofmann’s Method- The mixture of 1°, 2° and 3° amines is treated with diethyl oxalate. When the three amines react differently, as given below:
1° amines forms a substituted oxamide (crystalline sold), 2° amine forms a dialkyl oxamic ester (liquid) and 3° amine does not rear at all. 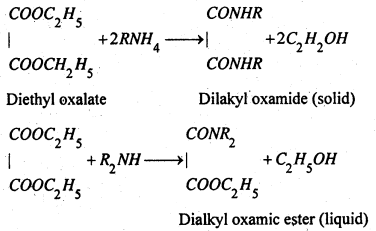 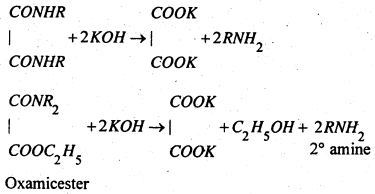 3. Hinsberg’s method- This is better method and is based upon the fact that on reaction with benzene sulphonyl chloride, (C6H5SO2Cl) (Hinsberg’s reagent)
(i) A primary amine gives a sulphonamide, which is soluble in alkali.

(ii) A secondary amine forms a sulphonamide which not containing a replaceable hydrogen atom attached to nitrogen atom, is insoluble is alkali.

(iii) A tertiary amine (R3N) remains unreacted.
The mixture of amines is treated with Hinsberg’s reagent (C6H5SO2Cl). The reaction mixture is basified with 5% KOH solution and then shaken with ether in a separating funnel. The tertiary amine and the dialkyl substituted sulphonamide (from the 2° amine) go into the ether layer.

The aqueous layer containing potassium salt of benzene mono alkyl substituted sulphonamide is acidified to regenerate the primary amine which with excess of the acid, forms the salt RNH2HCl.

The 1° amine is recovered by distillation with KOH.

The ether layer containing unreacted tertiary amine and dialkyl substituted sulphonamide is shaken with hydrochloric acid, when in the form of hydrochlorides go into the aqueous layer.

The two hydrochlorides can be separated by fractional crystallisation and the two fractions are separately distilled with alkali to generate the corresponding amines. (2) From Nitre compounds- When nitro alkane is reduced with Sn and dil HCl or with hydrogen and NI catalyst, primary (1°) amine is formed.

(3) From amides- Primary amines can be prepared from amides by the following processes:
(a) By Hofmann’s Bromide reaction- When an acid amide (1 mole), primary (1°) amine is formed

(b) By the reduction of acid amides- When acid amide is reduced by C2H2OH and Na or LiAlCH4, primary (1°) amine is formed.

Question 2.
(A) What are ethers? How can you prepare ether from (1) Alkykalide and (2) alcohol.
(B) Discuss the reaction of ether with (1) Hydrogen iodide (2) PCl5 and (3) Acetyl chloride.
Answer:
(A) Ethers-Ethers are regarded as dialkyl derivatives of water or monoalkyl derivatives of alcohols. The general formula of ether is CnH2n+2O and represented by general structure R-O-R’.

Methods of Preparation-
(1) From alkyl halides- When alkyl halide is treated with sodium or potassium salt of alcohol, gives ether. Here halogen of alkyl halide is replaced by alkoxy group. This process is known as “Williamson’s synthesis”.

(2) From alcohols- This method involves heating pf excess of primary alcohols with conc. H2SO4 at 413 K. In this process dehydration of alcohols occurs.

In can excess of HI is used, the alcohol formed reacts further with halogen acid to form alkyl halide. The overall reaction can be written as :

(2) Reaction with PCl5– In cold, PCl5 has no action on others but on heating, phosphorous pentachloride reacts with ether to form alkyl chloride.

(3) Reaction with Acetyl chloride- Ethers when heated with acetyl chloride in the presence of anhydrous ZnCl2 gives alkyl halide and esters. 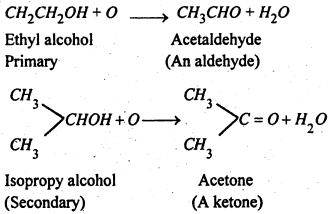 (2) By the dry distillation of Ca-salt of fatty acids- Calcium salt of a fatty acid when heated with calcium formate, gives an aldehyde while a ketone results when calcium salt is heated along. 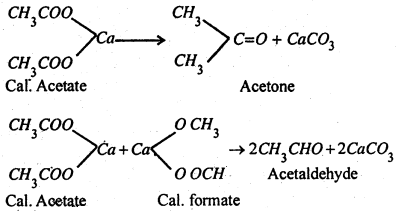 (3) By hydrolysis of alkylidene halides-

This accounts for the large number of reaction common to both aldehydes and ketones as given below:
(1)Addition reactions of the carbonylic group-
(i) Addition of hydrogen (Reduction)- Aldehydes are reduced to primary alcohols while ketones yield seconary alcohols. 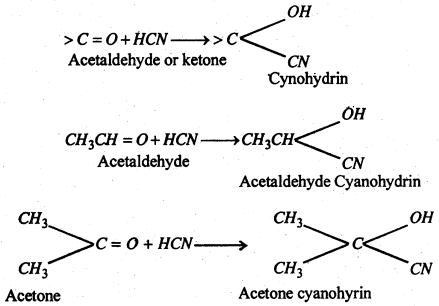 (iii) Addition of sodium bisulphite- Addition of NaHSO3 to give crystalline bisulphite compounds. these on heating with dilute acid or Na2CO3 solution regenerate the original aldehyde or ketone.

(iv) Addition of Grignard’s Reagent- Both aldehydes and ketones give addition products which on hydrolysis give secondary and tertiary alcohols respectively. Formaldehyde gives primary Alcohols.

(ii) With Hydrazine- NH2 . NH2 they give hydrazones.

(v) With Phosphorous Pentachloride- The oxygen atoms is replace by two chlorine atoms.

4. Aldol Condensation- The presence of dilute NaOH, K2CO3 or HCl, two mols. of acetaldehyde condense to give aldol (Syrupy liquid).

In case of condensation of aldehydes with ketones, it is α-hydrogen atom of the ketone which is involved in the condensation.

(1) Oxidation- Aldehydesare easily oxidised to the corresponding acids and on this account, act as strong reducing agents. For examples, the reduce ammonical solution of silver nitrate to metallic silver and Fehling’s solution to red cuprous oxide.

Ketones on the other hand are oxidised with difficulty to give acids with less number of carbon atoms. They do not reduced am. AgNO3 or Fehling’s solution. The carbonyl group remains chiefly with the smaller alkyl group. The resin with other aldehydes is probably formed as a result of a series of condensation e.g.

3. Schiffs Test- Aldehydes give a pink colour with Schiffs reagent. Ketones do not give this reaction. Acetone, However restore the magenta colour very slowly.

4. With ammonia- Aldehydes give an addition product called aldehyde ammonia while ketones give complex ketonic amines. Formaldehyde is an exception which give hexamethylene tetramine.