Such reactions in which a stronger nucleophilie displaces a weaker nucleophile are called nucleophilic substitution reactions and the atom or group (halide ion) which departs with its bonding pair electrons is called the leaving group. Among the halide ions, the order in which leaving groups depart follows the sequence : I– > Br– > Cl–

(iv) Substitution of halogen by isocyanide group- When the aqueous ethanolic solution of a haloalkane is heated with silver cyanide, alkyl isocyanide or alkyl isonitricle is produced.

(v) Substitution of halogen by nitre group- When an aqueous ethanolic solution of a haloalkane is heated with silver nitrite, nitroalkane is formed. 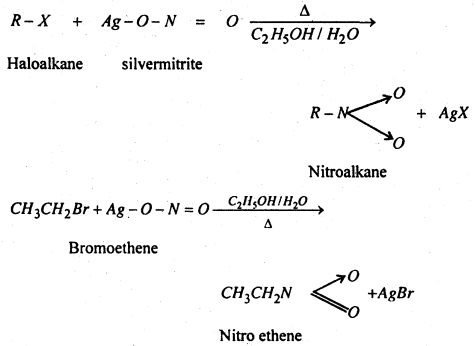 (vi) Substitution of halogen by amino group- Haloalkanes when heated with an ethenolic solution of ammonia in a sealed tube at 373 K, from mixture of 1°, 2° and 3° amines along with quartenary ammonium salts. (vii) Substitution of halogen by carboxylate group- Haloalkanes form esters when hated with an ethenolic solution of silver salt of a fatty acid. 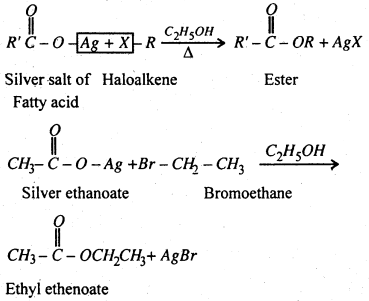 (b) Oxides- Nitrogen has strong tendency to form Pπ-pπ multiple bonding with nitrogen and oxygen atoms whereas other elements of this group do not. Actually N forms five oxides with oxidation states ranging from + 1 + to +5 (N2O, NO, N2O2, NO2, N2O5) while other elements form oxides only in +3 and +5 oxidation states eq. P2O2, P2O5, Sb2O3, Bi2O2 etc.

(c) Halides- The elements of group 15 form halides of two types- trihalides MX3and pentahalides MX3 where M = N, P, As, Sb and Bi and X = F, Cl, Br and iodine. Nitrogen does not form pentahalides because of the absence of third shell in it. 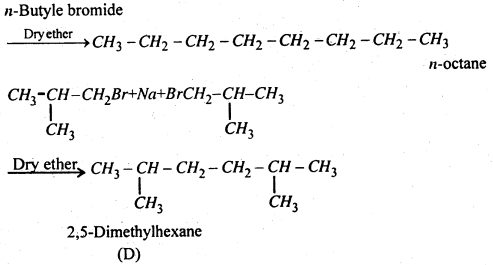 Therefore (A) is isobutyl bromide which is confirmed from the following reactions:

(b) Reaction with magnesium- When magnesium is ignited in ammonia gas, magnesium nitride is formed with evolution of hydrogen gas
3Mg + 2NH3 → Mg3N2 + 3H2

(g) Reaction with CuSO4 Solution- When an aqueous solution of ammonia is poured into an aqueous solution of CuSO4, cuppric hydroxide is precipitated which dissolves in excess of ammonia forming a soluble complex tetraammine copper (II) sulphate due to which the solution becomes blue.
NH3 + H2O → NH4OH
CuSO4 + 2NH4OH → Cu(OH)2 + (NH4)2 SO4
Cu(OH)2 + (NH4)2SO4 + 2NH4OH → [Cu(NH3)4]SO4 + 4H2O

Question 6.
How is SO2 art air pollutant?
Answer:
(i) SO2 is strongly irritating to the respiratory tract. SO2 at a concentration of 5 ppm causes throat and eye irritation resulting in cough, tears and redness in eyes. It causes breathlessness and affects larynx, i.e; voice box.

(ii) Even at a low concentration of 0.03 ppm, it has a damaging effect on plants. If exposed for a long time, it slows down the formation of chlorophyll resulting in injury to the leave including loss of green colour. This is called chlorosis.

Question 9.
Can PCl5 act as on oxidising as well as reducing agent? Justify.
Answer:
The oxidation state of P in PCl5 is +5. As P has five electrons in its valence shell, it cannot increase its oxidation state beyond +5 by donating number from +5 to +3 or some lower value, So PCl5 acts as an oxidising agent. For example, it oxidises Ag to AgCl, Sn to SnCl4.

(iii) Formation of hydrides : All the elements complete their respective octets by sharing two of their valence electrons with 15-orbital of hydrogen to form hydrides of the general formula EH2 i.e., H2O, H2S, H2Se, H2 Te and H2Po: Therefore, on the basis of formation of hydrides of the general formula, EH2, these elements are justified to be placed in group 16 of the periodic table.

Question 11.
Why is dioxygen a gas but sulphur a solid?
Answer:
Oxygen forms pπ – pπ multiple bonds. Due to small size and high electronegativity oxygen exists as diatomic (O2) molecules. These molecules are held together by weak van der Waals’ forces. Hence O2 is a gas at room temperature. 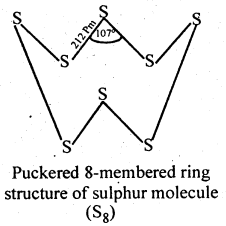 Structure of white and red phosphorus are given below: 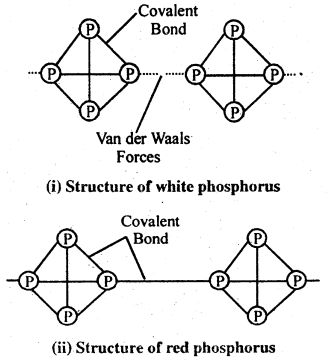 Question 13.
(A) What do you mean by molecularity and order of reaction? What is relation between molecularity and order of a reaction?
(B) What do you mean by rate of reaction? Derive an expression for the rate constant of a first order reaction. What are the characteristics of a first order reaction?
Answer:
(A) Molecularity of a reaction :
In a reaction A + 2B → C + D, one molecule of A reacts with two molecules of B to give on molecule each to C and D. The total number of molecules of A and B, in this reaction is called the molecularity of this reaction.

The reaction in which only one molecules of the reactant takes part is called unimoleular reaction. For example, conversion of maleic acid into fumaric acid is a unimolecular reaction.

Order of reaction-
It is not necessary that the concentrations of all the reactants take part in a reaction can determine the rate of reaction. Therefore, a new term “order of reaction” has been introduced.

This is also defined as follows :
“The order of reaction given by the total number of atoms of molecules whose concentrations determine the velocity of the reaction.”
The rate equation of a general reaction mA + nB → pC + qD is expressed as \(\frac{d x}{d x}\) = K[A]m [5]n where m and n are small numbers (whole of fractional).

During hydrolysis the concentration of only ethyl acetate changes since water is present in large excess. Hence this is a first order reaction.

When the rate of a reaction depends upon two concentration terms, the reaction is known as a record order reaction. For example, hydrolysis of an ester by an alkali is a second order reation because during the course of reaction concentrations of both ester and alkali change.
CH3COOC2H5 + NaOH → CH3COONa + C2H5OH
Thermal decomposition of acetaldehyde is an example of second-order reaction.
2CH3CHO → 2CH4 + 2CO

Relation between molecularity and order of a reaction :-
Till recently, molecularity and order of reaction were regarded as synonymous. But it has now been found that in certain cases the two are not identical. For example, in inversion of cane sugar into glucose and fructose or in the hydrolysis is of ethylacetate in presence of acid catalyst apparently two molecules take part, making the reactions bimolecular. But actually the concentration only one of the reactants changes i.e. concentration of water does not appreciable, change as it is present in large excess.

Though, molecularity of a reaction often concides with its order,but the two need not be always identical.

The rate can be determined by following the concentration of any of the reactants or products with time. The rate may be defined by the equation Average rate of reaction.

The rate of a reaction is defined as the rate of change of concentration of either reactant or product per unit time.
Let us consider a simple reaction