For example, the value of Am∞ for acetic acid (CH3COOH) can be calculated form the knowledge of the molar conductivities at infinite dilution of strong electrolytes like CH3COONa, HCl and NaCl as follows:

Question 3.
(A) How can you prepare alcohols from (1) alkyl halide (2) Aldehydes and ketones.
(B) Discuss the following chemical reaction of alcohols (1) Oxidation (2) Reaction with PCl5 (3) Esterification and (4) Dehydration.
Answer:
(A) Methods of Preparation of alcohols-
(1) From Alkyl halides Haloalkancs-
When alkyl halide is boiled with aqueous solution of an alkali hydroxide or moist silver oxide give primary alcohols.
RX + KOH(aq.) → ROH + KX

(b) By reduction- Aldehydes on reduction give primary alcohols and ketones furnish secondary alcohols.

(B) Chemical reaction of alcohols-
(1) Oxidation- (a) A primary alcohol on Oxidation with acidified potassium dichromate first gives an aldehyde which on further Oxidation gives an acid with the same number of carbon atom as the original alcohol.

(2) Reaction with PCl5- Alcohols react with PCl5 to form chloroalkane :

(3) Esterification- Alcohols react with monocarboxylic acids in the presence of conc. H2SO4 to form ester. This reaction is called “esterification.” 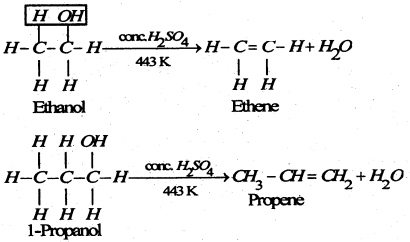 The reaction is exothermic, the heat of reaction maintains the temperature of the catalyst.

Step-II: The Nitric Oxide is then oxidised to NO2 by air which is cooled to 50°C and absorbed in water.

But in case of very dilute solution, V may be neglected (because it is very small) from the denominator. Thus Raoult’s law can be written as:

If the value of w, W, M, po be known, we can calculate the molecular weight of solute from eqn. (2).

when l = 1 cm., a = 1 sq. cm., then (ii)
becomes-
Sp. Conductivity = Conductivity
Hence specific conductivity may be defined as:
“The conductivity of 1 cm. cube of the solution of electrolyte”.
It is denoted by symbol kv when V is the volume in cc., containing a certain weight of
substance dissolved in it and is measured in reciprocal ohms or mhos.

Thus the equivalent conductivity of a solution may also be defined as:
“The product of specific conductivity and the volume V in c.c. of the solution containing g. equivalent of the electrolyte”.

It is obvious that each cell is made up of two metal electrodes. At one electrode oxidation takes place (i.e. electrons are used up).

For example: Daniell Cell, in which oxidation takes place at zinc electrode while reduction at copper electrode is known as half cell. The potential between a metal and a solution is known as single electrode potential.

It is not possible to determine experimentally, the single electrode potential (i.e. of a half cell). Usually a half cell is combined with some standard electrode and the e.m.f. of the complete cell is measured.