Question 1.
Give reasons:
(i) Xenon does not form fluorides such as XeF3 and XeF5.
(ii) Out of noble gases, only xenon is known to form established chemical compounds.
(iii) Noble gases have very low boiling points.
Answer:
(i) All the filled orbitals of Xe nave paired electrons. The promotion of one, two or third electrons from the 5p-filled orbitals to the 5d-vacant orbitals will give rise to two, four, six half-filled orbitals. Therefore, Xe can combine with even number of F atoms, but numbers. Thus, it cannot form XeF3 and XeF5

(ii) Except radon which is radioactive, Xe has the least ionization energy among noble gases hence it readily forms chemical compounds particularly with O2 and F2.

(iii) Noble gases are monoatomic. Their atoms are held together by weak dispersion form hence can be liquefied at very low temperatures. So, they have low boiling points.

Question 3.
Water is a Liquid White H2S is a gas. Explain.
Answer:
Oxygen is more Electronegative than sulphur. H-Bond present between molecules of water, Therefore More water molecules get associated to form a bigger molecules. Consequently water exist as liquid at normal condition of temp. & pressure. But in H2S. H – Bond is absent, so H2S exist as gaseous state.

Question 4.
Write notes on – (i) Hund’s rule (ii)Aufbau principle.
Answer:
(i) Hund’s rule- Hund’s governs the filling of electron in an orbital. According to this rule electron pairing in any orbital is not possible until all the available orbital of a given shell contain on electron each.

Three p orbital are of equal energy but are concentrated indifferent region of space at right angles to each other. Electrons cause minimise the repulsive forces between themselves by occupying different orbitals and having parallel spins. This explains their preference to enter different orbitals as long as possbile.

(ii) Aufbau principle- Aufbau, a German expression pronounced as ‘of bow’ means building up. According to this principle, orbitals are filled in the order of increasing energy. In other words the orbital with a lower energy is filled up first before the filling of the orbital with higher energy commences.

(n + l) values for various orbitals are as follows. 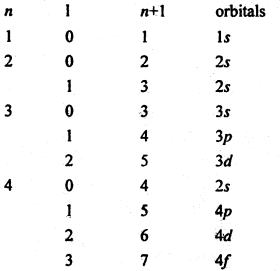 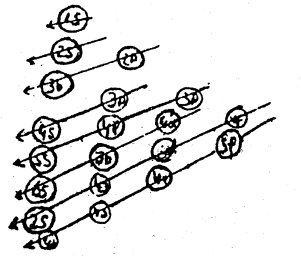 For example, whether a new electron will go to 2p or 3s. This can be predicted, with the help of this rule, that the new electron will 2p sub-shell because for this sub-shell, n is 2 where as for 3s it is 3, though the values of (n + l) for both sub-shells is 3.

That is for every acid there exists a base which is produced when the acid loose it proton. The acid and base so related are said to be conjugate to one another. Thus for acetic acid the acetate ion is evidently a base. The
CH3COOH ⇌ CH3COO– + H+
Proton released in likely to be associated with the solvent molecule and the ionisation can be expressed in case water solvent.
CH3 COOH+ H2O ⇌ CH3 COO– + H3O+

Following may be recognised as acids and bases in aqueous media :

The above discussion of acids and bases may be summarised as :
(i) A substance will be able to show its acidic character only if another substance is capable of accepting a proton. For example, HCl or CH3COOH in benzene solvent will not show the acidic properties because benzene does not take up protons. Thus water is capable of accepting proton then HCl or CH3COOH will ionised into it.

(ii) The proton H+ in aqueous solution is always hydrated i.e. H3O+ which is known as hydronium ion due to its resemblence with ammonium (NH4).

(iii) Acids and bases are not only the molecules but even ions may act like acid and bases. As given above Cl–, HSO4–, NO3–, behave as a base because they can accept a proton.

(ii) Lewis acids and Bases- A more general acid-base concept was given by Lewis in 1923, who tried to receive the weakness of Lowry and Bronsted theory. According to him. “An acid is a substance (molecule, redical or ion which can accept a pair of electrons to form a co-ordinate compound and base is a substance which can furnish this pair of electron to form a co-ordinate compound.”

The above definition may be said in this way also that an acid is electron acceptor which a base is electron donner. In another way, it may be said Lewis base are the substances having unshared pair of electron while Lewis acids are the substance having empty orbitals in which the electron pair as given by the base may be accomodated. For example,
NH3 + BF3 → [H3N → BF3]

A Lewis acid is often described as an electrophilic reagent (electron loving) and a base as a nucleophilic reagent. These terms are, however, more common to mechanism in organic chemistry.

Unfortunately Lewis definition is so general that it includes reactions which are often more usefully considered from different stand points. For example, the following acid-base reactions can be better described in terms of complex formation and oxidation-reduction respectively.

For example, the value of \(\wedge_{m}^{\infty}\) for acetic acid (CH3COOH) can be calculated from the knowledge of the molar conductivities at infinite dilution of strong electrolytes like CH3COONa, HCl and NaCl as follows: The Schottky defects are shown by those compounds which have (a) high coordination number, (b) small differences in the size of cations and anions. A few examples are NaCl, KBr, CsCl, KCl etc. As number of ions decrease hence the density decrease because volume remains constant due to this defect.

(ii) Frenkel defect: In the ionic compound of the type A+B– if an ion is missing from its lattice site, causing a vacancy or a hole there, and it occupies the interstial site, the electrical neutrality as well as the stoichiometry of the compound are maintained. This type of defect is called Frenkel defects.

Since cations are usually smaller, it is more common to find the cations occupying interstitial sites. The compounds which exhibit Ferenkel defect have (a) lower coordination number (b) large difference in the v size of cations and anions.

It is found in silver halides due to small size of Ag+ ion. Since no ions are missing from the crystal as a whole, density of the solid remains unchanged.

Since it contains only one ionizable H-atom which is present as OH group, therefore, it behave as a monoprotic acid. 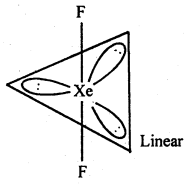 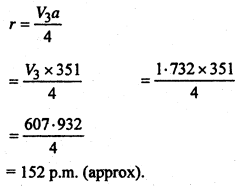 Question 12.
Fill in the Blanks-