As the number and size of the alkyl groups around C = O group increases, there is steric hindrance which makes the attack of the nucleophile on the carbonyl carbon more difficult.

Monomer- Monomer is a simple molecule capable of undergoing polymerisation and leading to the formation of the corresponding polymer. For examples ethane, vinyl chloride etc.

Question 5.
Name an alkaloid in each case used for the treatment of: (a) hypertension, (b) malaria, (c) pain.
Answer:

(iii) When acetaldehyde is treated with NaOH solution, aldol is obtained.

(iv) Acetone when heated with iodine and caustic soda solution, iodoform is formed. 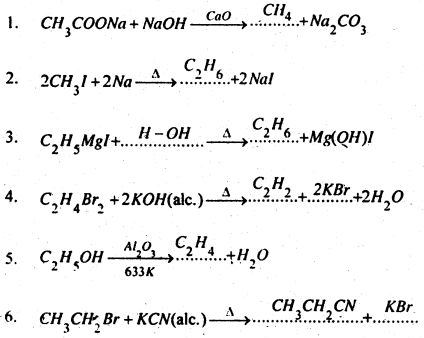 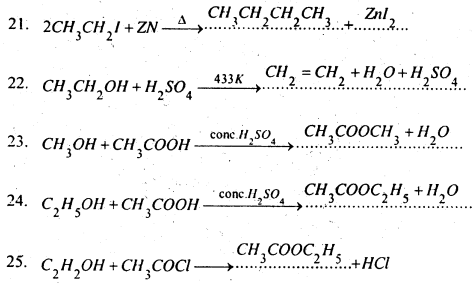 Question 9.
Give reasons for the following observations :
(i) SF6 is not easily hydrolysed though thermodynamically it should be.
Or, SF6 is inert towards hydrolysis.
(ii) Sulphur exhibits greater tendency for catenation than selenium.
Answer:
(i) in SF6, S is sterically protected by six F atoms and hence does not allow H2O molecules to attack the S atom. Further, F does not have d-orbitals to accept the electrons donated by H2O molecules. As a result of these two reasons, SF6 does not undergo hydrolysis. On the other hand, in SF4, S is not sterically protected since it Is surrounded by only four F atoms. Thus, attack of H2O molecules can take place easily and hence hydrolysis occurs.

(ii) As we move from S to Se, the atomic size increases and hence the strength of E-E bond decreases. Thus, S-S bond is much stronger than Se-Se bond consequently, S shows greater tendency for catenation than selenium.

Question 10.
Account for the following :
(i) Bond dissociation energy of F2 is less than that of Cl2.
(ii) Both NO and ClO2 are odd electron species but NO dimerises while ClO2 does not.
(iii) Bleaching of flowers by chlorine is permanent while that by sulphur dioxide is temporary.
Answer:
(i) Fluorine atom being smaller in size, the interelectronic repulsions between the non-bonding electrons, present in the 2p-orbitals of fluorine atoms are much larger than similar interelectronic repulsion in the 3p-orbitals of chlorine atoms.

In contrast, SO2 bleaches coloured material by reduction and hence bleaching is temporary since when the bleached colourless material is exposed to air, it gets oxidised and the colour is restored.
SO2 + 2H2O → H2SO4 + 2H

Question 11.
Assign appropriate reasons for each of the following statements:
Metal fluorides are more ionic in nature than metal chlorides.
(ii) Hydrogen fluoride is a weaker acid than hydrogen chloride in aqueous solution.
(iii) Addition of Cl, to KI solution gives it a brown colour but excess of Cl2 turns it colourless.
(iv) Perchloric acid is a stronger add than sulphuric acid.
Answer:
(i) According to Fajan rules, a bigger anion is more easily polarised than a smaller anion. As a result, same metal cation can polarise a bigger Cl– ion more easily than the smaller F– ion. In other words, for the same metal, the metal fluoride is more ionic than metal chloride. So,. in general, we can easily say that metal fluorides are ionic than metal chlorides.

(ii) Due to the smaller size of F as compared to Cl, the bond dissociation energy of H-F bond is much higher than that.of H-Cl bond.Thus, in aqueous solution, H-Cl bond can break more easily to form H+ ion than H-Cl bond. Hence, hydrogen fluoride is a weaker acid than hydrogen chloride in aqueous solution.

(iii) Cl2 being a stronger oxidising agent than I2, first oxides KI to give I2 which imparts brown colour to the solution.

If Cl2 is passed in excess, the I2 thus formed gets further oxidised to iodic acid (HIO3) which is colourless.

(iv) The oxidation state of Cl in perchloric acid is +7 while that of S in sulphuric acid is +6.

Thus, ClO3 part of HClO4 can break the O-H bond more easily to liberate a proton than the SO2 part in H2SO4. Therefore, perchloric acid is a stronger acid than sulphuric acid.

Question 12.
(1) Why HF add is stored in wax coated glass bottles
(2) CIF3 exists but FCl3 does not.
Answer:
(1) HF does not attack wax but reacts with glass. It dissolves SiO2 present in glass forming hydrofluorosilicic acid.
SiO2 + 6HF → H2SiF6 + 2H2O

Question 13.
Why arc halogens coloured?
Answer:
All halogens are coloured. It is due to the reason that their molecules absorb light in the visible region as a result of which their electrons get excited to higher energy levels while the remaining light is transmitted. The colour of the halogens is actually the colour of this transmitted light. The amount of energy needed for excitation decreases progressively from F to I as the size of the atom increases. Hence, the energy of the transmitted light goes on increasing from F to I.

Question 14.
Write the reactions of F2 and Cl2 with water.
Answer:
F2 being a strong oxidising agent oxidises H2O or O3.

Question 15.
How can you prepare Cl2 from HCl and HCl from Cl2 ? Write reactions only.
Answer:
HCl can be oxidised to Cl2 by a number of oxidising agents like MnO2, KMnO4 and K2CrO7.
MnO2 + 4HCl → MnCl2 + Cl2 + 2H2O
Cl2 can be reduced to HCl by reaction of H2 in the presence of diffused sunlight.

Question 16.
How are XeF2, XeF4 and XeF6 obtained ?
Answer:
These xenon fluorides are prepared by direct reaction between Xe and F2 under differentiation as shown below: 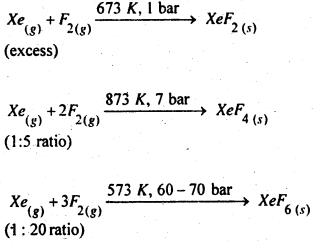 (2) F-atom is smaller in size than I-atom. Hence the bond dissociation energy of H-F is high as compared to that of H-I bond. Therefore, H-I bond breaks more easily than H-F bond and thus HI is a stronger acid than HF.

Due to the bigger size of P than N, P-H bond thus formed is much weaker than the N-H bond. Thus, PH3 has less tendency than NH3 to accept a proton. Hence, PH3 is weaker base than NH3 or NH3 has a higher proton affinity than PH3.

(ii) Fluorine and oxygen are the most electronegative elements and hence are very reactive, they form compounds with noble gases, particularly xenon.
(iii) Neon lights are visible from long distances even in fog and mist and hence neon is gas used for warning signals.