Question 3.
Define Henry’s Law.
Answer:
The Partial Pressure of a Gas in vapours phase (P) is directly proportional to the mole fraction of the Gas in the solution.

Question 4.
(b) When Ethyl alcohol is heated with Iodine in pressure of NaOH, then give product is-
Answer:
Iodo form-CHI3

Question 6.
Give one Example of Antibiotic.
Answer:
Terramycin.

Question 7.
Account for the following :
(a) Among the halogens. F2 is the strongest oxidising agent.
(b) Fluorine exhibits only-1 oxidation state where as other halogensexhibit higher positive oxidation state also.
(c) Acidity of oxoacids of chlorine is HOCl < HOClO < H0ClO2 < HOClO3
Answer:
(a) It is due to low enthalpy of dissociation of F – F bond and high hydration enthalpy of F.
(b) Fluorine Cannot show positive oxidation state because it is die most electronegative and also due to the non-availability of d-orbitals (1s2 2s2 2p5) in electronic configuration.
(c) The acid strength of the oxoacids of same halogen increases with increase in the number of oxygen atoms bonded to die central halogen atom. The oxygen atoms attract bond pairs towards themselves and weakens die O-H bond which is ruptured readily.

Question 9.
What is formula of chloral.
Answer:
CCl3CHO

. As a result substance has net magnetic moment. Fe3O4, a ferrimagnetic substance, on heating to 850k becomes paramagnetic because at this temperature there is greater alignment of spins in one direction.

Question 15.
Why are lyophilic sols more stable than lyophobic sols?
Answer:
Lyophilic sols are highly hydrated due to adsorption of water molecules as they are solvent attracting. Lyophobic sols on the other hand hate the dispersion medium and are thus less stable.

Question 16.
How will you distinguish between an oil-in-water type and water-in-oil type emulsion?
Answer:
A small amount of an oil soluble dye is added to the emulsion. If it is water-in-oil type of emulsion, it becomes deeply coloured, otherwise it remains colourless.

Question 21.
Addition of Cl2 to Kl solution gives it a brown colour but excess of chlorine turns it colourless. Why?
Answer:
Chlorine, being a stronger oxidising agent than iodine, just oxidises KI into I2 which imparts brown colour to the solution.
2KI + Cl2 → 2KCI + I2
If, however, Cl2 is passed in excess, the iodine formed gets further oxidised to iodic acid HlO3 which is colourless.
5Cl2 + l2 + 6H2O → 2HIO3 + 10HCl

Question 24.
Compound A reacts with thionyl chloride to give compound B. B reacts with magnesium to give Grignard’s reagent. This is treated with acetone and the product is hydrolysed when 2-methyl-2-butanol is obtained. Predict A and B.
Answer:
A is ethanol CH3CH2OH and B is ethyl chloride C2H3Cl

Question 28.
What are main constituents of Dettol?
Answer:
Dettol is a mixture of chloroxylenol and terpineol in a suitable solvent.

Question 30.
How are synthetic detergents better than soap?
Answer:
Soaps when used in hard water form curdy precipitate that separates as scum. These insoluble soaps are useless as cleansing agent. Synthetic detergents, on the other hand, can be used in any type of water because they from foam even in water containing mineral compounds. Some of them can give foam even with ice cold water. 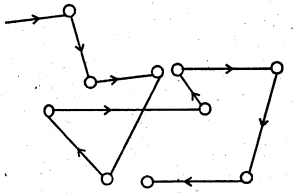 When a colloidal solution is examined by ultramicroscope the colloid particles appears as minute point of light in a state of constant rapid zig-zag motion. This zig-zag motion of colloidal particles is called Brownian movement after the name of discoverer Robort Brown (1827), an English botanist.

This motion is independent of the nature of the colloidal particles. It is more rapid when the more of the particle is small and the solution is dilute or less viscous.

(2) Tyndall Effect- It is our common experience that when sun-rays enter a dark room, the dust particles in the part of light become clearly visible. Similarly when a strong beam of light after being passed through a system of condensing lenses is focussed on a colloidal solution the part of the beam becomes visible and when viewed through microscope placed at right angle to the path of light (ultra-microscopically) the colloidal particles appear al pin points of light moving against a dark background in a sol. Zsigmondy has even been able to determine the size of colloidal particles through this phenomenon by using ultramicroscope fitted with micrometer scale. This phenomenon is known as Tyndal effect, The illuminated path is known as Tyndall cone. The phenomenon is however, not observed in case of put solvents or true solution and when viewed in the same way the liquid appears perfectly dark and the part of the bear becomes visible.

Zsigmondy and Siedentoph derived an ultramicroscope for a clear view of Tyndall effect.

“This movement of colloidal particle in electric field is known as Catophoresis.” This phenomena was first observed by Linder and Picton in 1882.

(4) Coagulation- The colloid particles carry similar type of charge and thus due to mutual electrical repulsions are kept apart. But if this charge be somehow neutralized, the particles will come together to form large particles and hence precipitate out.

“This precipitation of colloidal solution is known as Coagulation or Flocculation.”
For example- An addition of little barium chloride to a colloidal solution As2S3 the latter precipitates out. It is due to the fact that + vely charged Ba++ ions are attracted by – vely charged particles of As2S3 with the result that the charged of the latter gets neutralized. Thus robbed of their charge, the As2S3. particles gather together to form bigger aggregates and finally settle down in the form of a precipitate.

(5) Peptisation- It is observed that freshly precipitated substances can often be redispersed into colloidal state by suitable reagents, generally with an ion in common with the material to be dispersed. Thus fresh precipitate of the (OH)3 readily passes into colloidal form when treated with dil. FeCl3 solution.

This process of transferring back a precipitate into Collodial state is called Peptisation.
The ferric chloride which has caused the dispersion is known as Peptising Agent.
It the converse of coagulation and may be regarded as redispersion of coagulated sol.

(6) Dialysis- Graham found the crystalline substances like NaCl when dissolved in water can pass through parchment paper or other membranes made of parchment while colloidal substance like gelatin cannot do so.

The process of separating a crystalloid from a colloid by filtration or diffusion through a membrane is called Dialysis.

It is due to the fact that pores of membrane are very small and can only allow the dissolved molecules or ions of the true solution to pass through, but not the bigger sized colloidal particles.

The apparatus employed to effect such a separation is known as Dialyser.

Question 32.
What do you mean by nucleotide? Write four functions of RNA.
Answer:
A nucleotide contains only two basic components of nucleic acids i.e., a pentose sugar and nitrogenous base.

Question 33.
Explain the follow ing terms- (a) Ores (b) Mineral (c) Gangue or matrix (d) Metallurgy (e) Flux (f) Slag (g) Calcination (h) Roasting (i) Concentration (j) smelting and (k) Electro Refining.
Answer:
(a) Ores- An ore is a naturally occuring substance from which the metal can be extracted economically.

(b) Mineral- A mineral is any element or any inorganic compound found in nature.

(c) Gangue or matrix- The unwanted rocky earthy or sandy materials almost always associated with the ores as impurities are called Gangue of matrix.

(d) Metallurgy- The science and practical techniques of the issolation of pure metals from their ores is called metallurgy.

(e) Flux- Plux is a substance which is added to the ores before heating with the object that it combines chemically with the earthy impurities (gangue) and from a fusible mass known as slag.
Flux + impurities = Slag.

(f) Slag- The slag is a substance which is immicible with the metar and phas a low melting point. Slag having lesser density, flots on the metal and protects it form oxidation.
Slag is formed by the action of flux and impurities present in the ore.
Slag = Flux + impurities.

(g) Calcination- In this process ore is heated in suitable furnace in absence of air much below it melting point. So that the one gets dried up and the volatile impurities like moisture are driven off.

(i) Roasting- The process consists in heating the concentrated ore in a suitable furnace strongly in presence of air with or without certain substance below the melting point in order to bring about some desired chemical smelting.

(j) Smelting- The operation in which a metal is entracted in the state of fusion is called smelting.

The crude metal is mode the anode the thin sheets of pure metal are made cathode. The electrolyte is usually an aqueous solution of a suitable salt of metal with some corresponding acid of necessary.

When the electric current is passed, pure metal deposite on the cathode and impurities settle down at the bottom and are removed is anode mud.

Question 35.
Why is adsorption always exotherm?
Answer:
Adsorption is accompanied by decrease of randomness i.e. this factor opposes the process i.e. ΔS is positive. For the process to be spontaneous factor ΔG must be negative. Hence according to the equation ΔG = ΔH – T ΔS, ΔG can be -ve only is ΔH is -ve i.e. process is exothermic. Hence adsorption is always and exothermic process.

There are four colligative properties :

Question 37.
What are emulsions? Describe different types of emulsions with example.
Answer:
Emulsions are colloids in which both the dispersed phase and v dispersion medium are liquids. Emulsions are of two types- oil-in-water type and water-in-oil type.

Question 39.
Why perchloric acid (HClO4) is stronger than sulphuric acid?
Answer:
The oxidation number of Chlorine in perchloric acid is +7 while that of sulphur in H2SO4 + 6. As a result ClO3 part of HClO4 can break the O – H bond more easily to liberate a proton that H2SO4.

Question 40.
What is refining and how liquation process is used for refining of metals?
Answer:
The process of purifying the crude metals is called refining of metals. Low melting metals like tin and lead are refined by liquation since the melting points of these metals are lower than those of refining. The impure metals are melted on a sloping hearth of a furnace. Pure metals melt earlier than impurities and flow on the sloping surface leaving behind the unmelted impurities.