Question 1.
What is the difference between a reflex action and walking?
Answer:

Question 2.
What happens at the synapse between two neurons?
Answer:
Nerve impulses are carried from one neuron to another neuron which lie end to end but are not connected. The small gap between the neurons is called as synapse. It is filled with a chemical (neurotransmitter substance). The electrical impulse from the axon of one neuron sets off the release of these chemicals into the synapse. The chemicals released transmit the impulse to the dendrite of the next neuron to create an electrical impulse in it. This presence of synapse between the junctions of axon endings and dendrites helps in transmission of impulse in one direction.

Question 3.
Which part of the brain maintains posture and equilibrium of the body?
Answer:
Cerebellum region of hind brain.

Question 4.
How do we detect the smell of an agarbatti (incense stick)?
Answer:
Olfactory receptors present in ours nose detect smell and transmit the information to forebrain which interprets the message.

Question 1.
What are plant hormones?
Answer:
Chemical substances which help in the proper growth and development of the plants and also enable them to respond to the environment are called plant hormones. For example, auxin, cytokinin, etc.

Question 3.
Give an example of a plant hormone that promotes growth.
Answer:
Auxin.

Question 5.
Design an experiment to demonstrate hydrotropism.
Answer:
Hydrotropism is a plant growth in which the direction of growth is determined by the stimulus or gradient in water concentration.

Take a sieve, put some sawdust in it and make it moist by adding some water. Now place a few germinating seeds on moist sawdust. After some days, the radicles will be seen growing downwards under the influence of gravity. But after a further few days, it can be observed that the radicles bend back and enter the moist sawdust due to the hydrotropic response of the roots.

Question 1.
How does chemical coordination take place in animals?
Answer:
Chemical coordination is achieved by the hormones secreted by the endocrine glands (ductless glands) in the animals. Hormones are secreted in very small amounts, secreted directly into the blood and act only at the target organ. They help in the coordination of various activities of the body. For example, stress hormone called adrenaline is secreted to respond during emergency situations.

Question 3.
How does our body respond when adrenaline is secreted into the blood?
Answer:
Adrenaline is secreted in higher amounts in our body during stress or emergency situations to respond to the situation in an effective manner. It increases the rate of heart beat, breathing rate and blood pressure which causes release of more glucose in the blood to provide energy. In this way adrenaline helps the organism to overcome the stressful situation. Hence, its also called as stress hormone or emergency hormone.

Question 4.
Why are some patients of diabetes treated by giving injections of insulin?
Answer:
Sometimes due to insufficient production of insulin by the pancreas, the level of glucose in the blood rises. The excess glucose gets excreted by the person in urine and leads to the disorder called diabetes. So, in order to supplement the requirement of insulin, the patients are treated by giving insulin injections.

Question 1.
Which of the following is a plant hormone?
(a) Insulin
(b) Thyroxin
(c) Oestrogen
(d) Cytokinin
Answer:
(d) Cytokinin

Question 2.
The gap between two neurons is called a
(a) dendrite
(b) synapse
(c) axon
(d) impulse
Answer:
(b) synapse

Question 4.
What is the function of receptors in our body? Think of situations where receptors do not work properly. What problems are likely to arise?
Answer:
Receptors are present in our sense organs like nose, ear, tongue, skin, etc. They help in receiving the stimulus and transmitting it through the sensory nerves to the central nervous system for generating a response.

Question 5.
Draw the structure of a neuron and explain its function.
Answer:
The basic structural and functional unit of the nervous system is called as a nerve cell or neuron. A neuron has three parts-Cell body, dendrites and axon. 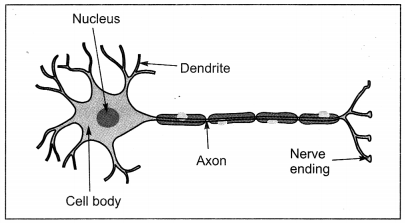 The dendrites help to acquire the information from the receptors on the sense organs and transmit it in form of electrical impulse to the axon through the cell body of the neuron. At the end of the axon, the electrical impulse leads to the release of chemicals at the synapse which starts a similar electrical impulse in the next neuron on being received by its dendrites. This enables transmission of nerve impulse in one direction from one neuron to another till it reaches the target organ, muscles, gland or brain.

Question 6.
How does phototropism occur in plants?
Answer:
The directional movement of a plant or its part in response to unidirectional exposure to light is called phototropism. The site of perception of light is the shoot/ root apex where auxin is synthesised. The shoot apex bends towards light while the root apex bends away from light. Auxin is a shade loving hormone which is uniformly spread in the stem. But, due to unidirectional exposure to light the auxin moves away from light and moves towards the shaded part of the stem. More amount of auxin on the shaded side of the plant causes more growth on the dark (shaded) side of stem, thereby bending the stem towards the source of light.

But in the case of the root an increase in the auxin on the side away from light causes a slower growth on that side. So, the root bends away from light.
Thus, the effect of auxin on growth of stem is opposite to its effect on the growth of root.

Question 9.
What is the need for a system of control and coordination in an organism?
Answer:
Multicellular organisms have different tissues and organs which are specialised for a particular function. There is a need of these organs to act in a coordinated manner for the proper functioning of the body. So, the nervous system and the endocrine system are needed for effective control and coordination in an organism.

Question 12.
What is the difference between the manner in which movement takes place in a sensitive plant and the movement in our legs?
Answer:
Movement in Sensitive Plant:

Sugar has a sweet taste. No difference in taste will be observed if we eat sugar while pressing our nose between thumb and index finger, because the smell of sugar does not influence its taste. The smell of food perceived by the receptors of smell (olfactoreceptors) helps to stimulate the receptors of taste (gustatoreceptors). We will not be able to fully appreciate the taste of the food we are eating if we press our nose between thumb and index finger while eating because we won’t be able to smell the food.