Bihar Board Class 10 Science Solutions Chapter 8 How do Organisms Reproduce?

Bihar Board Class 10 Science Chapter 8 How do Organisms Reproduce? InText Questions and Answers

Question 1.
What is the importance of DNA copying in reproduction?
Answer:
The DNA copying is important because:

Question 1.
How is the process of pollination different from fertilisation?
Answer:
Pollination:

Question 4.
How does the embryo get nourishment inside the mother’s body?
Answer:
The embryo develops inside the mother’s body for about nine months. Inside the uterus, the outer tissue surrounding the embryo develops figner-like projections called villi. These villi are surrounded by uterine tissue and maternal blood. They provide a large surface area for exchange of oxygen and nutrients. Also, there is special tissue Placenta is nutrients. Also, there is special tissue placenta is embedded in the uterine wall. The embryo receives oxygen and nutrients from the mother’s blood through the placenta. The waste materials produced by the embryo are also removed through the placenta.

Question 5.
If a woman is using a copper-T, will it help in protecting her from sexually transmitted diseases?
Answer:
No, copper-T are placed in the uterus to prevent pregnancy. They can cause side effects due to irritation of the uterus.

Bihar Board Class 10 Science Chapter 8 How do Organisms Reproduce? Textbook Questions and Answers

Question 5.
What are the functions performed by the testis in human beings?
Answer:
Testis perform the following functions in the human beings:

Question 6.
Why does menstruation occur?
Answer:
Menstruation is a process which occurs when the egg is not fertilised by the sperm. The lining of the uterus prepares itself by becoming thick and spongy every month for receiving the fertilised egg and nourish the growing embryo. If the egg does not get fertilised then this lining breaks and comes out through the vagina along with blood by the process called menstruation.

Question 7.
Draw a labelled diagram of the longitudinal section of a flower.
Answer: Chemical Methods: Act by changing the hormonal balance of the body so that eggs are not released and fertilisation cannot occur. They may have side-effects too. For example, Oral pills.

The budding process of yeast may be seen as the yeast multiply by the process of budding. 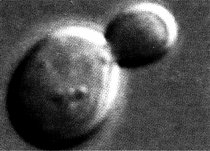 The slice of bread would be seen covered with a white cottony mass of fungal threads called hyphae, belonging to the fungus Rhizopus. Rhizopus reproduces by spores formed in the sporangia borne on the hyphae.

Amoeba has no definite shape, has cytoplasm and a nucleus in a flexible cell membrane. During binary fission Amoeba undergoes nuclear division and forms two nuclei. The two nuclei formed by division move to opposite directions in the parent cell. Ultimately, the cell divides and forms two daughter cells.

Spirogyra is a filamentous alga found as slimy filamentous green masses in clean water, ditches and ponds. Its filaments come to the surface of water and form dense green coloured structures on it. It has unbranched chains of cylindrical cells having spiral chloroplasts. It occurs as a slimy, green ‘blanket weed’ in ponds.

Only the pieces of potato having the notch or the bud give rise to fresh green shoots whereas those pieces which do not have the notch or bud are not able to reproduce. This is so because the reproductive buds are present in the potato at the regions called as eyes form where the buds arise to form new plants. Potato is a stem.

Only the portions which have at least one leaf will be able to form new plants because the leaves arise from the nodes. Nodes are the regions where reproductive buds are present in most of the plants. So, new plants will arise from the reproductive buds present at nodes in plants having at least one leaf, whereas the portion between two leaves known as the internode will not be able to form new plants.